Geocaching (pronounced gee-oh-cash-ing) is an outdoor recreational sport that involves the hiding and seeking of containers, which are also known as geocaches. Caches range in size from nanos, which are approximately the size of one’s fingertip, to large ammo boxes or large plastic containers. Each cache has a logbook, which the geocachers sign after finding the container. The larger containers will also usually contain trade items. The general idea is to take an item and replace it with something of equal or better value.

It’s actually astonishing how many geocaches are hidden in plain sight. While some may be hidden in hiking trails and parks, many are hidden in urban areas on metal rails or fences. The urban caches are often harder, as they require stealth during the hunt. While geocaching is not necessarily a secret, the activity demands discretion. It’s imperative that nearby “muggles” (non-geocachers) do not find the containers and mistakenly remove or destroy them. According to the official website, there are approximately 2.8 million caches active around the world (and just about 3 million geocachers).

I have been geocaching since 2012 and I have found over 800 geocaches to date. What I really enjoy about geocaching is its ability to showcase areas of natural beauty, historic significance, or sentimental value. Often, the cache owners place the containers in uniquely amazing locations. While geocaching, I have discovered historic cemeteries, breathtaking hiking trails, and architectural marvels that I definitely wouldn’t have visited, or even noticed, otherwise. 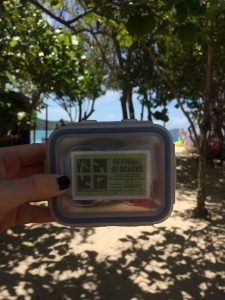